This is Scilly News

Up-to-date news from the Isles of Scilly

Two members of Tresco Coastguard saved the lives of a pair of drunk workers last weekend when their kayak capsized on the way back to Bryher. Tresco Island Harbourmaster Adam O’Neill (right), who is deputy station officer at the island’s Coastguard, was alerted to a commotion on the beach at New Grimsby at around 10pm last Sunday (March 31st) and found two men arguing. When the men said they were heading back to Bryher on their boat, he left them to it but decided to monitor

Scilly Emergency Services to work together

Emergency services on the Isles of Scilly and beyond spent a day last week discussing how to work more closely together.

A solo yachtsman who was not heard from for six days has been found safe 25 miles south west of the Isles of Scilly.

Yesterday's first ever Scilly Emergency Services Day has been described as "very successful".

A baby boy was born on board a Coastguard helicopter 1,400ft above Penzance after his mother went into labour on the Isles of Scilly.

Injured visitor flown out from Peninnis

A visitor was flown off St Mary's by Air Ambulance this afternoon after breaking her ankle on Peninnis.

The St Mary's Lifeboat assists the medical evacuation of a passenger from the cruise ship Marco Polo. 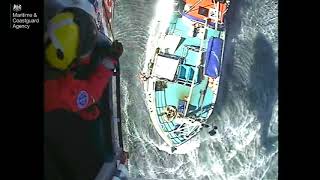 A fisherman from Penzance has been airlifted to Treliske after he was bitten by a shark 110 miles west of the Isles of Scilly.
1
2